An anime adaptation of Blue Period is coming this year, and a trailer has gone live for the show as well as a poster.

Blue Period is currently expected to debut in October 2021, and its new trailer shows off its main characters. The gorgeous clip introduces fans to Yatora as he is introduced to art for the first time. For those familiar with the manga, Blue Period seems like it will faithfully adapt Tsubasa Yamaguchi’s vision on screen, so we have plenty to be excited about!

Blue Period A Fascinating Story About Art And Passion

As for the show, Blue Period has cast Hiromu Mineta as Yatora while Yumiri Hanamori oversees the role of Ryuji. Daiki Yamashita is voicing Yotasuke while Kengo Kawanishi is taking care of Haruka. Finally, Maki is being played by Yume Miyamoto. Kouji Masunari is acting as general director with Katsuya Asano. Other crew members include Reiko Yoshida, Tomoyuki Shitaya, and artists with Seven Arcs. 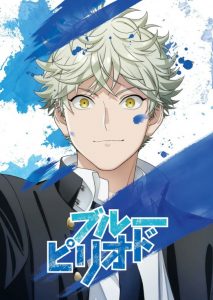 “Yatora is the perfect high school student, with good grades and lots of friends. It’s an effortless performance, and, ultimately… a dull one. But he wanders into the art room one day, and a lone painting captures his eye, awakening him to a kind of beauty he never knew. Compelled and consumed, he dives in headfirst — and he’s about to learn how savage and unforgiving art can be!”