This April anime adaptation of Tokyo Revengers manga will be released. Let’s take a look at the manga to see if it’s worth waiting for the anime version.

In the manga world with a bunch of creative content, time travel is not a new thing at all. But, Tokyo revenges manga or Tokyo manji revengers manga still makes its own mark when combine humor and scientific element perfectly. Now let’s see why this manga is well received by critics so much like that.

Related Content: What Are Best Action Manga 2020 For Otaku To Go On A Binge?

Tokyo Revengers Manga Doesn’t Have A New Plot But Interesting 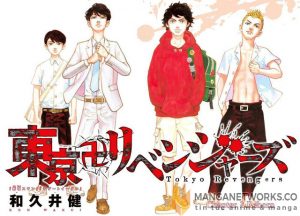 The story follows Takemichi Hanagaki whose life is at an all-time low. Just when he thought it couldn’t get worse, he finds out that Hinata Tachibana, his ex-girlfriend, was murdered by the Tokyo Manji Gang: a group of vicious criminals that has been disturbing society’s peace for quite some time. Wondering where it all went wrong, Takemichi suddenly finds himself traveling through time, ending up 12 years in the past—when he was still in a relationship with Hinata. Realizing he has a chance to save her, Takemichi resolves to infiltrate the Tokyo Manji Gang and climb the ranks in order to rewrite the future and save Hinata from her tragic fate.

First, I’d like to point out that this is not a story about national socialists. Comradeship, bromance, and bad blood – that’s what gang stories are made of. If you’re drawn to them like me, Tokyo Revengers manga won’t let you down since 99 percent of its characters are some sort of juvenile mobsters, gangsters and thugs. Our wimpy main character Takemichi is an ex-delinquent who discovers he’s able to travel back in time and embarks on a quest to make things differently the second time around. As we can guess, turns out that changing the past is not so easy and can alter the future unexpectedly.

If you prefer a solid and logical story. Tokyo Manji Revengers doesn’t have much of that: time traveling is like taking a taxi, outrageous plot twists just keep coming, and sometimes there’s so much going on that the story seems to forget what its primary target was. For those who don’t mind, the story can be crazy engaging. I found myself slightly interested at first, somewhat immersed later on and at the moment I’m craving to know what kind of turn it’s going to take next. 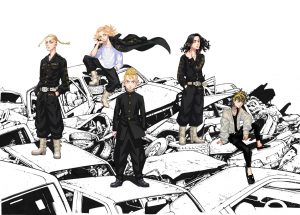 The more I have gotten to know all the characters, the more I’ve liked them. Our main guys are the Tokyo Manji Gang aka Toman, whose infernal conflicts and struggle for power against other gangs lay the foundation of the story. Takemichi is the kind of phlegmatic protagonist who has to discover his guts and resolve in order to take action in the middle of all the fighting and scheming. Being a cry-baby, the butt of all jokes and chronically clueless, he’s still a sympathetic character who has made me say time and time again “That’s my boy!”. Also, his puppy love with Hina is the sweetest.

What I really like about the art is how much effort has been put into making different hairstyles, clothes and accessories and how great the characters look in their badass styles.

In general, the art is good and fitting and simple enough to follow with ease even in the action scenes. Each character has a very distinct character design; the shape of the face, the pupils, the hair texture, everything. It’s quite crazy how detailed things can get. What I found to be especially remarkable is how the characters, who are drawn at different points in their lives still look like the same person even their hair or their body structure is changed. Each of them is their own person, and Wakui Ken makes sure to assert this not only through their dialogue or actions but through their appearances. I especially like how Mikey, Draken, and Hakkai look.

With every potential mentioned above, we all have the right to hope for a new blockbuster shounen manga after Kimetsu no Yaiba and Jujutsu Kaisen.