Originally, One Piece was planned to end much sooner. The story still keeps going with many emotional events, fascinating characters, which lead us to an old question: “How will One Piece end?” So, with no further ado, let’s try to find the answer! 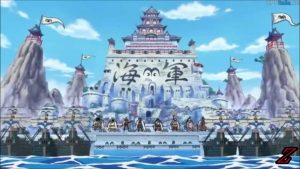 There will be a large-scale war arc, much, much bigger than the confrontation at Marineford that involves all the prevalent characters in the story. I have a feeling it will be more clear-cut in terms of good vs. evil as opposed the slight ambiguity of morality during the war at Marineford. The best thing I think that will happen during this battle will be the resurgence of many if not all allies the Strawhats have made on their journey: Galley-LA, the Giants, Kyros, Vivi, Bon Clay, and the Newkama, the Franky Family, the Kuja, Dalton and Kureha, Gan Fall and the Sky Islanders (Shandians and Skypeians) etc. As well as the return of many enemies of the Strawhats: Eneru, CP-9/CP-0, the Warlords, perhaps Big Mom or Kaido (undecided on this but I think the Yonko will have separate arcs to close their part in the story), the Blackbeard Pirates, and most prominently the entire naval force of Marines.

I do think the war will center primarily around two separate conflicts: the battle between the Revolutionaries and the Government, and the race between Luffy and Blackbeard to find the One Piece. These two incidences will be intertwined somehow, with many characters rearing their heads to help or hinder.

We know that the destruction of Fishman island by Luffy’s hand was prophesised and perhaps it is a result of this war. In Luffy’s bid to strike Mariejois, the Red Line crumbles, signalling the end of segregation and oppression all over the world. Fishman Island is in peril, but Poseidon summons the Sea Kings one last time and Noah can finally be called to action. The ship safely carries all the residents off the island, sheltering them from the debris and decimation around them.

Personally I can see some major internal conflict for Luffy as well. I can imagine Blackbeard posing such a large threat to all sides that the Marines will be forced to work together with several of their enemies. Imagine Sakazuki wrestling with his urge put down the Revolutionaries, but also opposed to the whims of the Celestial Dragons and the Gorosei. Imagine Luffy swallowing his grief and rage to have to share the same side with the man that killed his brother for the sake of his nakama and friends. I can see a moment of clarity for both of them after a massive one-on-one battle where they temporarily put aside their differences to take on a common enemy (probably the World Government). 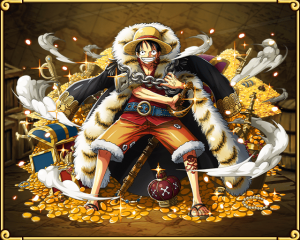 Now obviously we know Luffy will become the Pirate King, but never the one to play to expectation I think Oda will make it much harder for Luffy. Blackbeard will find the legendary treasure first and become the Pirate King. This immediately creates a roadblock for Luffy and one final showdown for his shot at the title of the most free man on the sea. I’m hoping the final scenes will be less grandiose and more confined. Less about armies and more about the clash of two. Luffy and Teach stand solitary on Raftel, opposing each other in both mind and body. A storm rages on in the distance as Blackbeard has one final epic monologue before the clash of conquerors and Luffy’s iconic “I’M GONNA KICK YOUR ASS”.

The End for the Strawhats 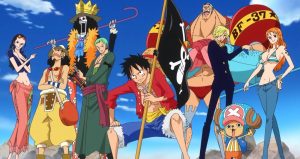 Luffy will become the Pirate King and be revered across the globe, his allies and friends will spread his story and the world will begin anew. He won’t take on leadership, but it will be thrust upon him. Pirates all over will look to him as their saviour and hero. It will come at a cost. I think Luffy will suffer from the same illness as Roger and inevitably cut short his fantastic adventure. But he wont care, after all, he went on an amazing adventure with his crew – that’s all he ever cared about – it was never about the title.

Zoro will achieve the rank of Greatest Swordsman in the World. Again, he won’t care for the glory, instead he will reflect upon his amazing adventure. He will most probably be responsible for seeing Luffy off and eventually disbanding the crew. Zoro will open up his own dojo when he gets old enough, maybe taking over his master’s old one in East Blue. I can see him with Tashigi, not necessarily romantically (maybe, but I can’t see Zoro as a family man), but as companions as they seek to find and restore the sacred blades and spread their wisdom of the sword. Who knows, he even might eventually be able to pay Nami off one day.

Nami will chart her map and see the world. I can see her regularly going on whacked adventures, sometimes taking other Nakama with her, sometimes with her sister, regularly studying on Weather for new meteorology techniques. She’ll have lots and lots of money to spend in doing so. I don’t think she’ll ever relent her thieving ways. There may even be a resolution for Nami with Sanji in the end. We know there’s chemistry, but I feel like if we saw them together it would be in some form of an epilogue.

Usopp will conquer all his fears. He will truly become the bravest warrior on the seas. He will inevitably go home to Kaya, but not before he spends years on Elbaf training with his comrades, the giants. Many kingdoms will have some legend associated with Usopp written in their history and he will become as renowned as Montblanc Noland, maybe even for being as much of a liar.

Sanji will find the All Blue. He will spend many years researching and cooking new recipes, able to great new superfoods. Sanji will want to settle down, he will start a family, but one day he’ll get a call. One that tells him it’s time to come home. Vinsmoke Judge on his deathbed will relent his grief about Sora and proclaim Sanji as the true Germa King. Unwillingness will drive him away but responsibility and his love for family will draw him back. He may well marry Pudding, or maybe end up with Nami, or maybe no one if he’s that unlucky. Sanji will be accepted as the ruler of the North Blue, but he will be a fair and just king, perhaps even critical in shaping the new government.

Chopper will become the world’s greatest doctor, able to cure all illnesses. I can see him living out his life on either Zou or going back to Drum Island. He won’t advertise his skills, but I feel as though his presence will be more of a rumour, whisperings of the great doctor who traveled with the Pirate King. His greatest shame is not being able to save Luffy, the one illness he could not fix. He and Carrot will probably travel together (provided she isn’t going to join the crew, or she isn’t the spy from Wano).

Robin will finally be able to learn and record the true history of the world. It will be her life’s work and she will want to spread the information across the world. I have a feeling that Robin will be instrumental in reconstructing the government from the ground up, possibly becoming one of the key governors maybe with Kuzan as her Fleet Admiral. Towards the end of her tenure, I can see her trying to restore the library of Ohara, slowly rediscovering the old texts and finding new ones to add to it.

Franky will become a world-renowned shipwright, most likely will join Iceburg in propelling Galley-LA forward with both workings to become the best. Franky will probably pick up all of Vegapunk’s old projects, maybe becoming his protegee. He will probably seek to get an official pardon for his old master Tom even in death, and maybe they will bring the sea train all the way across the world, repairing Water 7’s flood issue in the process.

Brook will finally return to Laboon. It will be his final adventure and for the rest of his days he spends writing songs about the Strawhats, ones that will last for all time. Bunking down in the Twin Capes, the Soul King will herald all new adventurers as they enter the Grand Line. The final panel of the manga revealing Brook singing along to his violin as he laments about the end of their journey with Luffy, but how the story has just begun.

>>>Read next: Significant Details You Can’t Miss In Attack On Titan Manga Ending

All things mentioned in this topic are just our speculation and some of my hopes for the story, but I look forward to what everyone else had to say, let us know your prediction on the comment box below!