Miura, the creator of Berserk, died at the age of 54, as a result of acute aortic dissection, according to a statement by Berserk publisher Hakusensha. 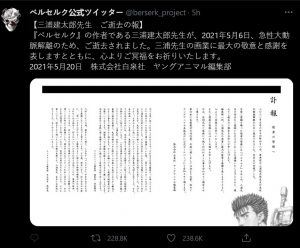 Ever since he was 10 years old, Miura was drawing manga. His work was published in his school’s newspaper, according to Crunchyroll News. When he turned 18, Miura broke into the professional manga industry as an assistant to George Morikawa, the creator of boxing manga Hajime no Ippo. Morikawa dismissed him after he saw that there was nothing left he could teach Miura. 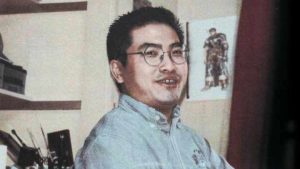 Miura created the first prototype edition of Berserk and submitted it to Monthly ComiComi magazine in 1988. The manga won the magazine’s Manga-School prize for second place, according to Crunchyroll. After Miura graduated from Nihon University in 1989, the first installment of the revised Berserk was published in Animal House (a magazine which would later be succeeded by Young Animal).

A following quickly built for the story of a swordsman named Guts who traveled his brutal medieval world on a quest for revenge. The manga was known for balancing gruesome violence and cruelty with touching and beautiful character moments.

The manga has also been adapted several times into anime, beginning in 1997 and 1998 with the most recent anime adaptation releasing in 2016 and 2017. There are also several video games based on the story.

The release of story chapters for Berserk had slowed down in recent years, and fans joked that Miura had abandoned work on Berserk to play the [email protected] video game which he has shown to be a fan of.

The last chapter of Berserk, chapter 363, released in the January 2021 issue of Young Animal. The story had yet to be concluded.

According to CNET, Berserk is one of the most influential manga of all time and has inspired other great works inside and outside of manga from Dark Souls to Demon Slayer.

A lot of fans have paid tribute to the late, great artist. As a fan of Manga in general, and Berserk in particular, we, Manga Mew also want to show our honor to Minura sensei.

Thank you for devoting your life to art, giving readers such a wonderful manga as Berserk. Rest in peace.