Manga horimiya manga ending soon with the last chapter on March 18th. One of the most famous romance manga finally reaches its last path.

Horimiya manga ending soon is the hottest topic on every manga forum. First published on September 26, 2012, Horimiya quickly get a lot of attention for its good plot. It’s no an exaggeration when said Horimiya is the shining light amongst the excessive flood of rehashed romance comedy manga that Japan loves to print out. Especially, when its anime adaptation released, Horimiya has become popular than ever. Now before Horimiya manga finished, let’s take a look over its long journey. 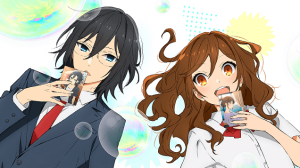 Horimiya has a simple yet enjoyable story. The story follows a normal highschool girl called Kyouko Hori,  a bright and popular high school student, in contrast to her classmate Izumi Miyamura, a gloomy and seemingly nerdy glasses-wearing child. Hori is a homebody who dresses down and looks after her younger brother Souta when she is not at school. She takes every attempt to hide this from her classmates. Souta was assisted by someone with numerous earrings and tattoos, as well as a punk-styled look, when he came home with a nosebleed one day. The entity recognizes her and introduces himself as Miyamura. They agree to keep their true identities concealed from their peers, but they begin to relate to each other as friends and then as a couple.

Why Horimiya manga get a lot of attention? 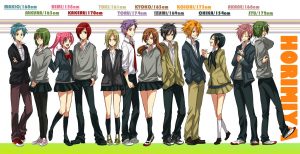 With its romance theme, a lot of people think Horimiya will be a normal shoujo out there, but, surprisingly, this manga is not shoujo, but shonen. No hero, no superpower, Horimya take approach a rarely seen side of shounen which is vulnerable and heartwarming. But, at its core, Horimiya follows the same story path as its contemporaries, albeit unconventionally. The story is about the character transformation process of Miyamura and Hori, which change their life in a better way with the support of the other.

Beside Hori and Miyamura relationship, we also can see the friendship between all character, which the manga focus on. It maintains the atmosphere of a typical rom-com show while keeping the viewer engaged in the drama and caring about the characters and their relationships. The show is a perfect example of the quote, “It’s not about the destination it’s about the journey.” We all know who’s going to end up with who, but despite this, we continue to enjoy the trivial moments.

A simple story, but relax and significant enough to make you remember, it’s no surprise that Horimiya is receipted popularly by many manga readers. 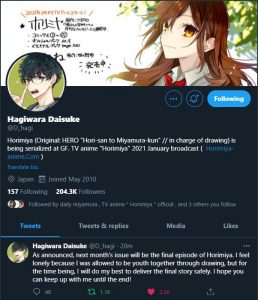 Hori-san to Miyamura-Kun’s final chapter will be hitting with the April 2021 release of Monthly G Fantasy Magazine, and this means the series will officially be coming to an end on March 18th in Japan. While the original manga series is coming to an end, the anime is introducing the series to all sorts of new audiences. It actually had the biggest romantic comedy premiere in recent years and has kicked off its English dub release in the last few weeks as well.

About its anime adaption, hopefully, we will be seen the second season soon.

What do you think about horimiya manga ending soon? Ready for horimiya manga finished? And, how do you feel about its anime? Let us know your thoughts in the comments section below.

If you want to find manga like Horimiya, you can check out this article: 7 Romance Comedy Manga To Warm Your Lonely Heart

Encounter a totally free bunch of manga library in any genre at: Manga Mew