Getting high appreciated by manga fans, Chainsaw man manga is a dark, fascinating manga. It is also called the “Shonen Jump’s darkest manga”.

What is Chainsaw man manga?

Chainsaw Man is a Japanese manga series written and illustrated by Tatsuki Fujimoto. It was serialized in Shueisha’s Weekly Shōnen Jump magazine from December 2018 to December 2020, with its chapters collected in eleven tankōbon volumes.

The story of Chainsaw man follows Denji, who has a simple dream—to live a happy and peaceful life, spending time with a girl he likes. This is a far cry from reality, however, as Denji is forced by the yakuza into killing devils in order to pay off his crushing debts. Using his pet devil Pochita as a weapon, he is ready to do anything for a bit of cash.

Unfortunately, he has outlived his usefulness and is murdered by a devil in contract with the yakuza. However, in an unexpected turn of events, Pochita merges with Denji’s dead body and grants him the powers of a chainsaw devil. Now able to transform parts of his body into chainsaws, a revived Denji uses his new abilities to quickly and brutally dispatch his enemies. Catching the eye of the official devil hunters who arrive at the scene, he is offered work at the Public Safety Bureau as one of them. Now with the means to face even the toughest of enemies, Denji will stop at nothing to achieve his simple teenage dreams. 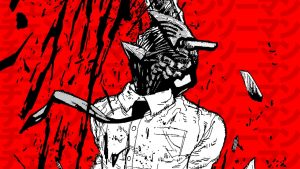 In chainsaw man, demons are formed from human fear. We can see how talented Tatsuki is when using this feature to bring up an extremely realistic story about war, nuclear weapons, … In addition, the world of Chainsaw Man has no concept of “main character” when anyone can unexpectedly be dead. Everything in Chainsaw Man is based on reality and there is no room for vain hope.

Chainsaw man manga is not only owning an entertaining story, but also owning a iconic artistic, extremely impressive metaphors. Utilizing both modern, religious elements, Chainsaw Man brings both fear and reverence among readers.

Denji have to suffer of loss from an early age. Having to survive at an early age which has made him being a selfish man. Besdie, Denji is extremely foolish  because of lacking education. He is just a big kid nonetheless.

The Chainsaw Man story is a growing up process of Denji. Through each chapter, we can see a new thing appearing in him, thereby make us realize big losses and pain within this character. This occur even when Denji turns into demon and kills people.

Each character in chainsaw man has their own story. Backstories are cleverly built through each of characters lines, actions, and individual characteristics.

Especially major antagonist, chainsaw man makima, who I think is one of the best villain in manga ever made. Makima is extremely cunning and manipulative. She controls Denji with promises of a romantic and sexual relationship while threatening him with extermination if he disobeys her.

Makima’s true, unstated goal, however, was to be together forever with Pochita and lead a happy life with him as she always yearned for something like a family, due to her being incapable of forming equal relationships with others as the control devil.

Is Chainsaw Man Manga Worth It Reading?

If you are too fed up with ideal hero stories, innocent characters, Chainsaw Man is an extremely addictive drug for you. Currently the manga is also reaching its final climax and is about to end, so this is the best time for you to read Chainsaw Man, especially chainsaw man anime release date prediction will be on this year 2021.  Note that Chainsaw Man manga is a heavy content manga, so preparing yourself before get on it.

Encouter the biggest manga library ever with: Manga Mew