Sport manga is always a popular subgenre. No more words, this article will give you the best sport manga of all time. 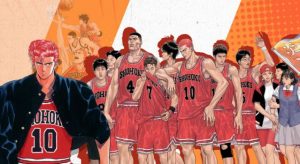 When someone asks me what is the best sports manga? I would definitely answer it’s Slam Dunk. This is one of those classic manga that any sports manga fan have heard of or read.

The story about Hanamichi Sakuragi, infamous for his temper, massive height, and fire-red hair, enrolls in Shohoku High, hoping to finally get a girlfriend and break his record of being rejected 50 consecutive times in middle school. His notoriety precedes him, however, leading to him being avoided by most students. Soon, after certain events, Hanamichi is left with two unwavering thoughts: “I hate basketball,” and “I desperately need a girlfriend.”

One day, a girl named Haruko Akagi approaches him without any knowledge of his troublemaking ways and asks him if he likes basketball. Hanamichi immediately falls head over heels in love with her, blurting out a fervent affirmative. She then leads him to the gymnasium, where she asks him if he can do a slam dunk. In an attempt to impress Haruko, he makes the leap, but overshoots, instead slamming his head straight into the blackboard. When Haruko informs the basketball team’s captain of Hanamichi’s near-inhuman physical capabilities, he slowly finds himself drawn into the camaraderie and competition of the sport he had previously held resentment for. 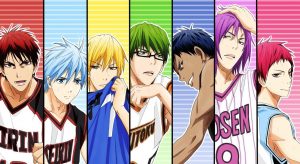 For sport manga recommendation, I think Kuroko No Basket is something we can’t miss on this list.

The story starts at a basketball team of a Japanese high school. At Seirin High School, two newly recruited freshmen prove that they are not ordinary basketball players: Taiga Kagami, a promising player returning from the US, and Tetsuya Kuroko, a seemingly ordinary student whose lack of presence allows him to move around unnoticed. Although Kuroko is neither athletic nor able to score any points, he was a member of Teikou’s basketball team, where he played as the “Phantom Sixth Man,” who easily passed the ball and assisted his teammates.

Kuroko no Basket follows the journey of Seirin’s players as they attempt to become the best Japanese high school team by winning the Interhigh Championship. To reach their goal, they have to cross pathways with several powerful teams, some of which have one of the five players with godlike abilities, whom Kuroko and Taiga make a pact to defeat. 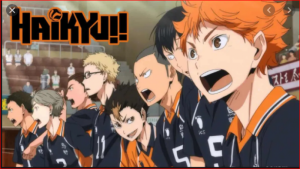 Moving up to one of my top 10 sports manga of all time, Haikyuu.

Inspired after watching a volleyball ace nicknamed “Little Giant” in action, small-statured Shouyou Hinata revives the volleyball club at his middle school. The newly-formed team even makes it to a tournament; however, their first match turns out to be their last when they are brutally squashed by the “King of the Court,” Tobio Kageyama. Hinata vows to surpass Kageyama, and so after graduating from middle school, he joins Karasuno High School’s volleyball team—only to find that his sworn rival, Kageyama, is now his teammate.

Thanks to his short height, Hinata struggles to find his role on the team, even with his superior jumping power. Surprisingly, Kageyama has his own problems that only Hinata can help with, and learning to work together appears to be the only way for the team to be successful. Based on Haruichi Furudate’s popular shounen manga of the same name, Haikyuu!! is an exhilarating and emotional sports comedy following two determined athletes as they attempt to patch a heated rivalry in order to make their high school volleyball team the best in Japan. 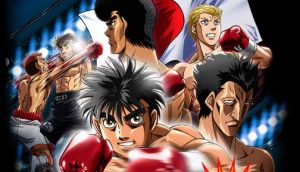 Hajime no Ippo is widely considered one the greatest if not the best sport manga of all time ever made!

Makunouchi Ippo has been bullied his entire life. Constantly running errands and being beaten up by his classmates, Ippo has always dreamed of changing himself but never has the passion to act upon it.

One day, in the midst of yet another bullying, Ippo is saved by Takamura Mamoru, who happens to be a boxer. Ippo faints from his injuries and is brought to the Kamogawa boxing gym to recover. As he regains consciousness, he is awed and amazed at his new surroundings in the gym, though lacks the confidence to attempt anything. Takamura places a photo of Ippo’s classmate on a punching bag and forces him to punch it. It is only then that Ippo feels something stir inside him and eventually asks Takamura to train him in boxing. Thinking that Ippo does not have what it takes, Takamura gives him a task deemed impossible and gives him a one-week time limit.

With a sudden desire to get stronger, for himself and his hard-working mother, Ippo trains relentlessly to accomplish the task within the time limit. Thus Ippo’s journey to the top of the boxing world begins. 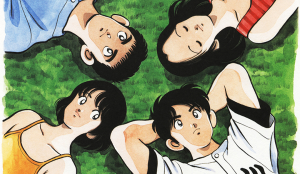 Since the birth of the written word, we have been taught that storytelling is most effective through drama. Good triumphing over evil, a mystery solved, a pair of lovers.

But there are also stories that choose to convey something a little bit more ordinary– something more human. A story not about the apocalypse, but one focused on a normal person growing up and finding their place in the world. A story where the antagonist is not some cackling lunatic, but a sibling or a friend.

What is interesting about something so mundane? Adachi Mitsuru’s “Touch” has the answer.

The story centers around three characters—Uesugi Kazuya, his twin older brother Tatsuya, and Asakura Minami. Kazuya is the darling of his town as he’s talented, hardworking, and the ace pitcher for his middle school baseball team. Tatsuya is a hopeless slacker who’s been living the life of giving up the spotlight to Kazuya, despite the fact that he may be more gifted than him. Minami is the beautiful childhood girlfriend and for all intents, a sister from next door who treats both of them as equals. Society largely assumes Kazuya and Minami will become the perfect couple, including Tatsuya. Yet as time progresses, Tatsuya grows to realize that he’s willing to sacrifice anything for the sake of his brother, except at the expense of giving up Minami to Kazuya. And thus the story is told of Tatsuya trying to prove himself over his established younger brother, how it affects the relationship between the three, and both brothers’ attempts to make Minami’s lifelong dreams come true. 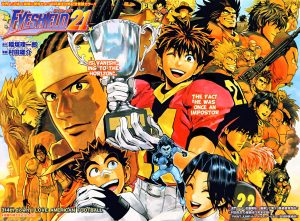 Timid, diminutive, and frequently the target of bullies, Sena Kobayakawa has just enrolled at Deimon Private High School. When he angers a group of delinquents by refusing to act as their errand boy, he makes an incredibly speedy getaway, an ability he has developed through years of running from his tormentors.

Youichi Hiruma—the demonic captain of the Deimon Devil Bats football team—happens to be nearby, and seeing Sena’s “golden legs” at work, forcibly recruits him as a running back despite Sena’s desire to be team manager instead. Made to don the number 21 jersey and a special helmet to hide his identity as a player, Sena becomes “Eyeshield 21,” the team’s closely guarded secret weapon. Soon he realizes his love for the sport and aims to help the Devil Bats reach the Christmas Bowl, the high school football championship.